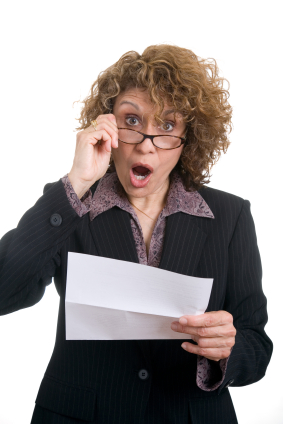 The best escrow is a closed escrow. Job well done…satisfied clients…all is well and it’s time to focus on the next one. Sometimes, though, like a zombie from a B-movie, a closed escrow will not die requiring some extra attention to put things right.

This particular example starts with a panicked phone call last month from Mrs. X, who just received a notice that she’d had a lien recorded against her by the Ventura County Tax Collector for the home she sold in April 2006. It was for less than $300 but there was no clue on the bill why she owed it and she wasn’t inclined to pay it. Especially since, from her view, escrow should have made sure that it had been taken care of. Right?

Mrs. X. is a charming lady with a thick Eastern European accent. Very nice and appreciative but watch out when she gets excited. She talks so fast; it’s hard to keep up with her. I sold her Ventura, California home for her in the spring of 2006 and she moved to Florida. She wasn’t mad at me—she just needed some help getting the matter resolved.

The mystery was quickly solved when I contacted Larry Matheny, Ventura County Tax Collector. Turns out that Mrs. X had an unpermitted addition on her house. Someone alerted the county and code enforcement came out to inspect it. They required her to tear it down or take out the neccessary permits and bring it up to code. She decided to get it permitted and had just completed the process prior to calling me to list the house for sale. The Ventura County Tax Assessor eventually reassessed the property based on the “new construction” which is what caused the assessed value to go up and the Supplemental Tax Bill to be issued by the Tax Collector. The trouble was the process was so slow that it didn’t happen until months after escrow had closed.

My staff reports that they have talked with Mrs. X to explain that the “mystery tax bill” is an unsecured supplemental bill triggered by new construction on her property. So, the two most obvious questions (at least to me) are, “why did it take so long to generate a bill?” and “why didn’t she get a bill before the lien recorded?”

As to the first one, in cases like this we are entirely dependent upon the Assessor’s office first doing the important job of assessing the added value of new construction. I don’t presently have any information as to how long it took from the time when they first became aware of the new construction and when they entered the new value on the roll. We can’t print a bill until at least 60 days have expired from the point when the Notice of Assessment is mailed to the property owner.

As to the second question, if a property owner closes escrow on the sale of property that is being examined by the Assessor for a supplemental assessment, we almost always end up with an undeliverable tax bill. That deed of conveyance that transferred Mrs. X’s interest to the buyer did not include a forwarding address for the seller. It is, unfortunately, not a rare situation to have a taxpayer sell the property before either the Supplemental Bill or the Notice of Supplemental Assessment can be delivered. In such cases, the existence of the tax obligation is not learned until the recorded lien pops up…often at an inopportune moment near the close of an escrow.

I’ll offer the take-away lesson that a Realtor who is representing a seller who has held title for less than a year would be doing the client a tremendous service by getting in touch with the Assessor (805-654-2181) to see if a supplemental assessment is being worked. In our current market, that resulting supplemental “bill” may well be a refund that is pending, but can’t be delivered for the same “can’t find the former owner” reason that applied when we are trying to deliver a bill that calls for a payment.

For whatever it is worth, our office, in cooperation with the Assessor and the Auditor-Controller, has started a project to replace our current 20-year old plus land tax system. The new system will incorporate many streamlined features that should have a positive impact on the processing time for supplemental. That’s the good news. The bad news is that the task is sufficiently complex as to likely require in excess of $20 million to build and probably will not be ready for 3 to 5 more years.

Sorry that this became so long-winded. I wanted to give you a full perspective that you can, hopefully, share with others.

Now that Mrs. X. understood the reason for the bill, she paid it. Perhaps this transaction can now rest in peace.